The New England Environmental Finance Center, Casco Bay Estuary Partnership, and Running Tide will explore the use of shellfish and kelp to reduce nitrogen levels in local waters. 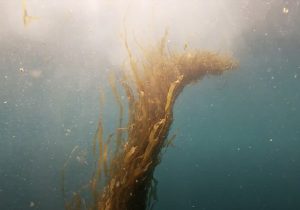 Portland, ME, December 9, 2021 – The Greater Portland region is an engine of Maine’s economy, yet its growing population also poses significant water quality challenges. Concentration of nutrients, especially nitrogen, in the waters in and around Portland regularly exceed levels of concern.

“Compared to other areas on the East Coast, Casco Bay is relatively healthy, but nutrient pollution is a rising problem, leading to harmful algal blooms, ocean acidification, and other ecological effects that distress marine habitats and disrupt the fishing and tourism industries, which are the backbone of our coastal economies,” said Congresswoman Chellie Pingree. Pingree helped secure funding for the Coastal Watershed Grants Program as Chair of the House Subcommittee on Interior, Environment, and Related Agencies.

In the next two years, the New England Environmental Finance Center and Casco Bay Estuary Partnership at the University of Southern Maine, in partnership with Maine-based aquaculture company Running Tide, will test the cost effectiveness and efficacy of shellfish and kelp to reduce nitrogen levels, and thus, algal blooms, in Casco Bay. The project team will establish a four acre aquaculture growing facility in Casco Bay near Portland’s East End. Using techniques honed by the aquaculture industry, Running Tide will grow kelp and shellfish that will absorb nitrogen from the water as they grow. As the kelp is harvested and shellfish mature over the course of a year, nitrogen is removed from the ecosystem.

Casco Bay communities and the City of Portland have been investing in clean water for years. Recent changes at the East End Wastewater Treatment Facility have reduced summer discharges of nitrogen to the Bay by more than two thirds, but future investments are likely to be costly. Portland Water District estimated that upgrading the East End Plant to full tertiary treatment (removal of nutrients) would cost about $40 million.

“On a pound for pound basis, is it less expensive to manage nutrients in Casco Bay by upgrading wastewater treatment plants, by building green infrastructure, or by investing in seaweed aquaculture?” asks Curtis Bohlen, Director of the Casco Bay Estuary Partnership.

This project will help answer some of these questions.

Today, Maine has no numerical nitrogen targets for coastal waters, but conversations are underway to establish water quality criteria in Portland waters that could lead to limits on total discharges of nutrients allowed. In the long run, the team envisions the possibility of a nutrient trading scheme for Casco Bay.

“The advantage of a nutrient trading scheme is that dischargers facing high costs for nitrogen control could invest in less expensive approaches – potentially by growing shellfish or kelp” said Martha Sheils, the Director of the New England Environmental Finance Center. “Knowing the cost-effectiveness of nitrogen reduction from aquaculture will give Portland a new innovative method to improve the Bay’s water quality.”

As Pingree concluded, “With funding from this grant program, local organizations in Maine and across the country will have the tools they need to ensure clean water and healthy ecosystems and fight against climate change.”

Casco Bay Estuary Partnership works in collaboration with state and federal agencies, local government, and dozens of local organizations to conserve the ecological integrity of the Casco Bay Watershed through science, stewardship, and collaboration.